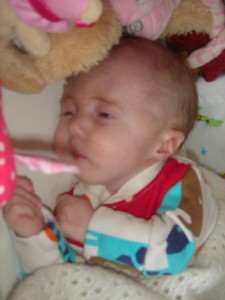 You wouldn’t believe it, but this new milk produced something truly monstrous in my nappy. My parents went into a state of shock, and then laughed hysterically for about 20 minutes. They couldn’t believe that a delicate thing like me could produce something like that!!

My feeding continued to dominate my days in April. I was really starting to struggle now. Most of the time I just wasn’t interested, I was taking less and less with each feed to a point where at times I was taking almost nothing. What I did take would come straight back up, and so we would go on.

On April 3rd, my parents decided reluctantly that I would need to have the tube put back in. Helen my lifetime nurse had been to visit and had observed Mummy doing one of my feeds, and agreed we needed to try and go back to the tube. Helen put the tube in, but I was really not happy about it. Mummy gave me a feed, and after Helen left , laid me down to settle. Whilst she was looking the other way, I decided to be sick and to pull the tube back out again tee hee.

Daddy came home and put the tube back in, and I had 2 feeds that evening from the tube. However, I may only be a few weeks old, but I still have a voice and I planned to use it. I screamed and screamed and screamed until Mummy could bear it no longer. In the small hours of the morning Daddy removed my tube yet again. Yaaay.

As I was refusing to take the tube, my parents were desperate for some help as I just wasn’t taking any milk. They decided to take me back to A & E where I met a lovely Doctor and the dietician. Of course, a bit like my previous trip to the hospice, having told the staff that I was not feeding, I decided to guzzle down my entire bottle right in front of them, leaving my parents pretty frustrated!!.  After examining me, it was felt that I probably had reflux. So Mummy was given some infant Gaviscon to mix in with my milk, as well as some tablets to dissolve and give me once a day. 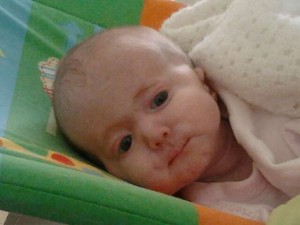 I also seemed to be ‘going’ less regularly, and the GP prescribed me some lactulose to help relieve some of the constipation.

Although my feeding immediately after the trip to the hospital was OK, I nosedived pretty quickly afterwards. I was taking almost nothing by this point. Mummy would sometimes spend 1 ½ hours feeding me next to nothing, only to see me bring the small amount I had drunk back up straight away. They were starting to feel as though they were making things up, as, as soon as I was put in front of nurses and medics I would feed like a dream!!  On one trip to my Nanny’s house I met my Great Auntie Carol, I fed well for her too, only to return home and once again reject my feeds. My parents were desperate for help.

Things took a serious turn for the worst though when we booked in for our next hospice trip on 11th April. When we arrived, one of the nurses commented on the fact I looked a bit off colour. I hadn’t looked unwell before, but Mummy agreed I didn’t look right. Initially, the staff and my parents just focused on my feeding issues.  I also had my second ever swim. It was nice being back in the pool again. Another special moment.

Kathy my lead nurse, very kindly spent her day off hunting all sorts of bottles and teats to see if there was something which might help me. She came up with something called a Habermann Feeder. It is used for premature babies and babies with cleft palates, as it helps regulate the flow of milk. My parents went on to Amazon, and ordered a bottle for next day delivery in the hope that it might help.

However, things started to change from here on in. Whilst my Mummy had been on line ordering my new bottle, I had had a bit of a funny turn in front of the nursing staff and the paediatrician. Mummy was called, and she could tell by the look on everyone’s faces that things were not right. She asked the staff to call Daddy at work, and to ask him to come over as soon as possible. Everyone seemed very worried. Mummy couldn’t sleep that night she was so worried so she came down and stayed in my room in the end.

In the morning, Mummy noticed I seemed to have a bit of a runny nose, and wondered if I had actually managed to catch a cold. My parents had been told that any kind of infection would be pretty bad for me, so were extremely concerned. I was given some Calpol and everyone kept a very close eye on me. Over the course of the day, I seemed to pick up a little, and even tried my new bottle, although it didn’t seem to help much.

My feeding pretty much vanished, so on the Saturday having finally witnessed just how hard I was to feed, the staff at the hospice suggested we try to put the feeding tube back in. Saturday was a bad day, I was extremely pale, in fact Mummy got very upset at one point, as she could see how unwell I was looking. Like before, I was seriously unhappy about the tube going back in. I may have been unwell, but I was still going to fight this. I screamed and I screamed and I screamed. In fact I didn’t stop. If you were in the hospice that day you would have heard me!!! Poor Jan the nurse who was looking after me that night, I think she went home pretty frazzled…sorry Jan!

At 5am on Sunday morning, my parents were woken by a knock at the door. It was Kathy, holding me in her arms. She broke the news to my parents that she thought I was probably unlikely to see the day through, and that I seemed extremely weak. My parents were obviously very upset, and decided straight away that the tube should be removed. I hated it so much they didn’t want me to die wearing it.

Mummy and Daddy just cuddled me that morning. I slept in their arms and it was lovely and warm. Instead of fading away, I decided to keep on fighting and gradually over the course of the day I started to improve, colour return and take some milk. My parents were amazed by my resilience and strength, they couldn’t believe it for such a little thing.

I continued to improve throughout the Sunday and the Monday. My stay at the hospice was extended to make sure I was completely well, and I had lots of visitors. My Nanny and Pappy Watts came to see me loads, as did my cousins and Aunt and Uncle. My Grandma and Granddad Hughes came to visit and my Uncle David even came back down to see me again. He ate a lot of cake!!!!!

On Tuesday 17th April I had another turn. I was actually with the paediatrician at the time. I was a bit sweaty, I was very agitated, I wouldn’t settle, and my heart rate was over 200. Mummy took one look at me and said ‘she really doesn’t look well does she’. Because I was so agitated, they all had a debate about whether or not I should be given some morphine.  After much discussion, and a bit of trepidation on the part of my parents, a small dose of Oromorph was dispensed to me. My parents watched and waiting…but after all that talk, it didn’t seem to make much difference!!! That night, I was given a bit more morphine and finally I managed to settle.

On Wednesday I woke up a different person. My heart rate was back down to where it should be, and my colour had returned. Nobody could quite believe it!!. Mummy and Daddy were so proud of me, I may have been small, but I was tough as old boots.

With my health steadily getting back to normal, focus shifted back onto my feeds. The new bottle hadn’t provided the solution everyone had hoped for. So the suggestion came that perhaps I should be weaned as it was hoped that I might have less problems swallowing foods that had a thicker consistency. I tried some baby rice that afternoon, and smacked my lips and ate it all up. I still had my milk most of the time and was now being fed via a syringe, but it was nice having something new now and again.

Unbelievably, by Thursday it was looking as though I might be well enough to go home. Mummy and Daddy had been unsure whether or not I would make it home again, and were so pleased to know I would be heading back. Before we left though Mummy was shown by Sarah at the hospice how to puree some foods for me to eat, and I was given some Pureed apple which was totally scrumptious

At times I was still a bit off colour at home, and on one occasion as I seemed agitated again my parents gave me a little more morphine, However, mostly feeding aside, I seemed to be doing OK again.

My Mummy’s friends Hannah and Roy came over to see me. They live somewhere called Australia, and came home to see their family and to meet me too. Helen from Holland came back again as well. She had a lovely Ipad with her, and I loved staring at all the swirly pictures on a baby app she had downloaded.

Quite surprisingly, considering how little I had been feeding, my weight continued to creep up in very small steps. I was now around 5lbs 11oz’s ……6 lbs here I come.

In late April, I had my first visit from a Jessie May Trust nurse.  The Jessie May trust is a Bristol based charity and nurses come to your home for 3 hour sessions to give you some respite. Mummy was able to get on with the house work, and even go shopping, knowing that I was well looked after. On my first visit, I just slept in the arms of the nurse the whole time. It was great…did I mention that I like cuddles

Although April ended well, it had been a tough month. Mummy and Daddy had had their first real ‘moment’ when I really wasn’t well. I had fought hard though, and I made it clear that I hoped to stick around for a bit longer. I like it here.