I spent the first 4 days of my life in NICU. I was in an incubator which was really warm and cosy, but it was hard not being able to get cuddles from Mummy and Daddy all the time.

On Thursday, the first day of my life, Mummy says that all was well with the world. Nanny Watts came to visit me, and despite a few ‘odd’ comments here and there that were made by consultants, about some of my physical attributes, the only concern my parents really had was about my heart. Mummy says that every time she said my name to come into NICU, it gave her goosebumps, and that she couldn’t believe that I was finally here and that I was real. 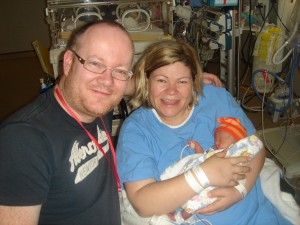 Mummy and Daddy were a bit worried that because I was in an incubator, some of the early bonding might be damaged. So the kind Doctors and nurses let me come out of my incubator from time to time, so I could have some lovely skin to skin contact with them. They also talked to me all the time, it was so nice to hear their lovely voices. At night time they left muslins in my incubator that they had worn on them during the day, so that I could smell them and feel comforted. They took such good care of me.

As we headed into the Friday, the consultants had raised a few concerns with Mummy and Daddy. They said I only had one horizontal line across the palm of my hand, that my ears were low set, my mouth was small and that I appeared to have rocker bottom feet. They started talking about genetics, although my parents didn’t know what this meant. They thought it might mean there was something that might have been passed down through the family, so they rang my grandparents but were relieved to hear that there was nothing known in the family.

Everything started to change on the Friday though. A geneticist came to visit Mummy in the maternity ward and talked to her generally about genetics, and the fact that tests were being run on me. Mummy didn’t really understand all of what was being said, but she understood enough to realise that this was serious. She rang Daddy to tell him about the meeting 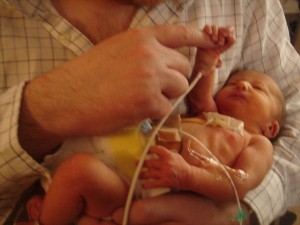 and that she feared for me. She was very upset. Daddy was worried too and tried to get more information from the doctors, but without the test results they wouldn’t confirm anything to him. That Friday night in NICU, a consultant talked to them about genetics and explained that there is a broad spectrum of symptoms ranging from learning difficulties to life restricting conditions. This was the first time my parents heard anything about disorders being ‘life restricting’. My Mummy says she gasped and just thought to herself ‘Surely not’.

On the Saturday a few more people came in to see me and Mummy and Daddy were able to do things like change my nappy, top and tail me, feed me and, of course, cuddle me. Mummy was expressing milk for me to drink as she wanted me to have the best. She kept disappearing to do this, and would return with numerous filled syringes. I was only taking very small quantities then 2.2 mls at a time, which were syringe fed into me. The rest of the time I was fed via an oro-gastric tube which had been fitted. Little did my parents know that morning, that within a few hours their lives would be turned upside down, and their hopes and dreams would be left in tatters.