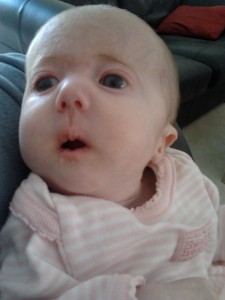 Can you believe it, I am now almost 4 months old. I am really starting to change. I have blue eyes, and although my hair was dark at first, it is now starting to go a bit ginger. I can almost hold my head, and I especially like looking at things, my favourite things to look at are the blinds in my parents house. When they are open I like looking at the dark and light patterns they make.

My feeding continued to be hard work though. I was now being fed via a syringe. Mummy was feeding me every 2 hours, very small quantities each time 20-30mls, but I was sometimes taking an hour to feed and I would scream the whole time. Mummy was very worried I might aspirate, but she was also determined to keep going. 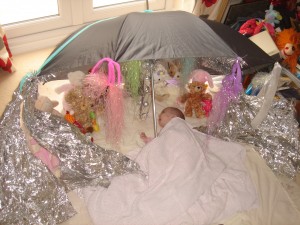 Mummy got a call from a lovely lady called Wendy from the Sure Start team in Yate. She offered to come to my house and make me a Sensory Umbrella. Basically it is an umbrella, and lots of bright sparkly things are dangled down from the spokes for me to look at. It was brilliant. I was able to sit under it, and I loved looking at all the shiny things.She also came back a 2nd time, and helped make me some discovery bottles and a treasure basket. They were all great. 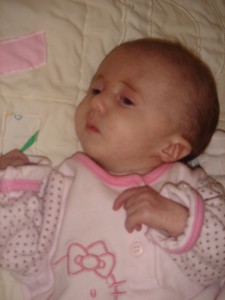 My Health Visitor Francesca continued to visit and to weigh me. Mummy was very grateful that she kept coming. By early May I was now 5lbs 13 oz’s. I was still in all my original baby gro’s, but Mummy could see that I was growing and that I was changing. My 2nd immunisations were now due, but this time Mummy was prepared. She had got some Calpol to hand, and there was no repeat of the 12 hour screamathon I had unleashed last time!!

On May 5th, I went on a very special trip to Solihull. Soft UK which is the charity for Edwards Syndrome, were holding a conference there, and my parents had decided to attend.  Mostly they wanted some help with the feeding issues which had plagued me, but they also wanted to meet other families and also meet some of the long term survivors of Edwards Syndrome.

From the minute I arrived, I was a bit of a celebrity. Everyone seemed to love me, and I lapped up every minute of it. A geneticist there offered to do what she could to help my parents with the feeding issues, which they were very grateful for. There was some mention of flavoured prescription milk too, although Mummy went on to find out this is for older children. At the conference, there were many interesting speakers. The saddest speech though was by a woman whose baby had died of Patau’s Syndrome. She was from Canada, and had soon discovered that although she had gone into hospital for a minor issue with her baby, because she had a non resuscitation policy on her child, the medics pretty much turned their backs on her. Sadly as a result she did not survive. In the years that have followed, she has attempted to get the medical profession to stop demonising children with Edwards and Patau’s, and to stop them suggesting theirs is a life not worth living.  As we looked around the room my parents could only agree. Whilst the statistics show that most babies do not survive to term or for long after birth, and many do have serious conditions when born which mean hospitalisation, there remain a few who do survive. We met two that day Saskia who is 20 and William who is 6. They were both very happy children, and the love they shared with their parents was clear. How could the medical profession claim that theirs was a life not worth living?

A weird moment came when my parents met a couple with another Edwards baby. She could have been my twin, and my parents were a little bit taken aback by this.
The conference was wonderful though. We met lots of lovely people, and for the first time in a very long time we found a place where we belonged. We were the norm, and it all felt OK.

When my parents returned from the conference, they decided to revoke my non resuscitation order. They had been deeply moved by some of the stories they had heard, and decided that although my long term survival seemed unlikely, that they wanted the decision to lie in their hands, and their hands alone.

I started going to baby massage in May. I had already had a taster at the hospice when Curly Chris showed my Mummy a few techniques to use on me. Mummy didn’t get to do much on me that day though as I slept a lot during the class, but what she did do, I liked! I met some other babies too, although they were much bigger than me, even though I was the oldest there.

Jessie May also came back for a 2nd visit, and Mummy went out on the hunt for a baby sling which would hold a baby of my small weight.

On Sunday May 13th, things were going well. Daddy cut the grass, and Mummy cleaned the house. Pappy Watts came round to see me too. I was doing fine. That night though, when it was time for bed, Mummy noticed that I wouldn’t settle. I was trying very hard to sleep, but each time I would start to drift off, I would jerk myself back awake again, become agitated and a bit grumpy. As Daddy was going to work the next day, Mummy took me into the spare room to let him get some sleep. That night I didn’t go to sleep at all. Mummy would feed me, give me some Calpol, and even gave me some Oromorph. She tried everything throughout the night to get me to sleep. But I just wasn’t able to.

The next day, Daddy went to work, and Mummy for a while still clung on to some hope that I would eventually become tired and fall asleep. By 11am she decided to call the Doctor, as she no longer knew what to do. Daddy came home from work, and the Doctor came round to examine me. She was very concerned. She thought I was going into heart failure. I think because I had been so ill a few weeks ago, my parents didn’t really take in what was being said. The Doctor asked if they wanted to take me to hospital or to the hospice, so a call was made, and that afternoon we went over to the hospice.

Dudley Kate was there that day. She used to say funny things to me and I liked her. My parents were still more concerned with my feeding than they were with my general health, and the staff tried something called thick and easy which is a thickening powder which was added to my milk. That night I lapped up my feed, it was yummy, and Mummy and Daddy went to bed concerned but not worried.

The next day Tuesday May 15th, Mummy woke to find that I had not been to sleep again. Her heart sank, and she began to get very worried for me. That day I had lots of visitors at the hospice, My Nanny and Pappy Watts were there, as were my Auntie Kelly and Uncle Damian. The paediatrician examined me, and agreed with the GP that I was now nearing the end of my life. Mummy refused to take it in, but I think everyone else knew that things were serious.

At times I fed well, but still between  feeds I was unsettled. As the morning progressed into the afternoon, things deteriorated for me. I had been having apnoea’s (pauses in breathing) pretty much constantly now for two days, and they were starting to have an affect on me.
Pappy Watts brought with him a bag of Chocolate Buttons. Mummy had said that before I left this world she very much wanted me to taste chocolate. I tasted it that afternoon, and it was yummy. I was so pleased. I even gave my family a smile for the first and only time in my life.

Over the course of the afternoon and early evening things continued to get worse, and I was taken to a private room. Mummy and Daddy said some lovely things to me, and cuddled me constantly. I was surrounded by my family and by love. At 9.15pm I was exhausted and although I very much wanted to stay I knew that my body would no longer let me. I closed my eyes one last time and passed away in my parents arms. 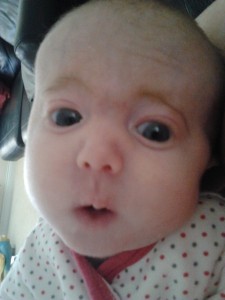 Night Night everyone, thank you for all your love, I have had a wonderful 16 weeks, and I am so pleased I got to meet you all.