Feeding from a bottle was lovely. As I had put a little bit of weight on I was now taking 50mls every 3 hours.  I would sit in my Mummy and Daddy’s arms and just look at them as I guzzled away at my milk. 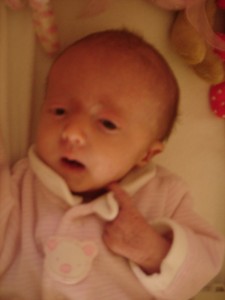 Initially the feeding was split as before, with Daddy doing the nightime shift and Mummy on hand throughout the day. However, on March 7th, my Daddy took the decision that as Mummy was now able to drive again, he felt comfortable enough with going back to work. This meant that Mummy was doing most of the feeds now, although Daddy did do the 6am feed before he went to work, and would help out when he got home.

As I was now feeding normally, I started to get a bit windy and a bit grizzly too. This hadn’t happened before when I was using the tube. About an hour before each feed was due, like a clock Mummy would say, I would start getting grumpy and start to cry. Fortunately (for a while at least), I would have settled down by the time my feed was due, so it didn’t impact too much at this stage on my feeding.

Mummy was still expressing, but she was finding it hard work and exhausting. Also because I now needed 50mls every 3 hours, she was also struggling to produce enough. It was enough to get by with, but if my feeds were to increase further, then she was starting to concede that I might need to move to formula.

It was strange at first with Daddy not being there during the day, but as soon as he came home I would get the most amazing cuddle from him, which would make me feel really happy. 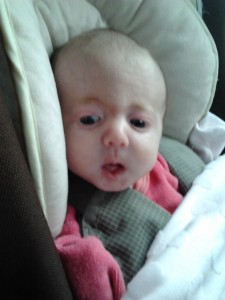 In March I also took my first trip to the shops. My Grandparents had come down from Wales to see me, so we all went to a big mall on the outskirts of Bristol together. I think Mummy found it quite hard work. She needed to be home every 3 hours to express, so by the time we had packed the car up, driven there, got me out, fed me, changed me…and visited about 1 shop, it was time to pack the car up and come home again.

Still it was nice to be out and about. Lots of people commented on me whilst we were there. A lot of people couldn’t believe how small I was, some even stopped and stared as I was being fed. It was the first time Mummy was made to feel as though I wasn’t quite the norm. She was used to my size, to her it was normal, but having so many people comment on it hammered home to her just how small I was. Most people would ask ‘was she premature’, to which Mummy would reply No. Then they would ask how old I was. When Mummy said 8 weeks they all seemed shocked. 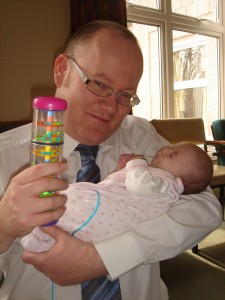 During one of my stays at the hospice Mummy had noticed how well I seemed to respond to Music. So she decided to take me to a ‘Music with Mummy’ class. It was great. Once again I was very small compared to everyone else there, but I loved hearing all the singing and noises.

After about 2 -3 weeks of feeding well from the bottle, things started to become a little more difficult for me. My wind was now starting to kick in when I was due a feed, and it was all a bit too much. My parents battled to get me to feed, although I would now start bringing up my milk straight afterwards too which is something I hadn’t done before.  At times Mummy was exhausted. It would take her almost an hour to feed me, then I would be sick which she would have to clean up. Then she would have to express and sterilise the bottles as well as catch up on calls from family, nurses, professionals and friends, before it all started again.  Sometimes she would just wear her nightie all day as she didn’t have the time to change.

Her hard work was rewarded though on March 18th as it was Mother ‘s Day. She was so pleased I was still here and that she had been able to celebrate this with me. Daddy and I had come up trumps and bought her a lovely card, as well as some flowers, a teddy bear and an Indian Cook Book (actually that was Daddy’s idea), I think it was a hint for Mummy of what he wanted to eat!!!!!

A 3rd trip was soon due at the hospice. This time Mummy was desperate for some respite. Mummy handed me to the nursing staff on duty and went straight to bed!! A good sleep was just what she needed. There was a Jacuzzi pool at the hospice. Before Mummy had known about my illness she had planned to enrol me for things like ‘Water Babies’ to teach me to swim. However, after my diagnosis it was suggested that I should not go to a Municipal Swimming Pool for fear of catching an infection. 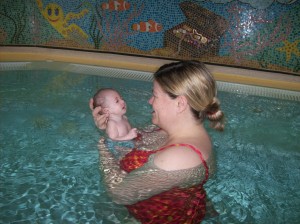 Finally, I was able to have a swim. The pool was great. The staff were able to filter music into the room, and there were lots of twinkly lights as well in the ceiling for me to look at. Here is a picture of Mummy and I in the pool together. Mummy says that apart from the moment when I was born, that this was the best moment in her life.

At the hospice, the staff seemed to have no problems with my feeds (I was on my best behaviour for them!!), but they did help my parents identify a new bottle and teat that I should try. It was called a NUK bottle, and the milk didn’t seem to come out so quickly which was better for me. They also discussed moving me onto some special premature baby milk, which was high in calories and should help me to grow. A conversation was had with the dietician at the Childrens Hospital, and it was agreed that I would move onto something called Infatrini as soon as possible. The milk came on prescription, which meant we had to get the prescription raised, and milk ordered before we could go and collect it. The Dietician did give us a few bottles to get us started though. It was like drinking condensed milk, it was so thick and creamy.

March also saw my first round of immunisations. Mummy had been a bit scared. She didn’t know if I should be having them or not, and was very worried. However, she took the decision that I would be better having them than not, especially as no-one knew what my life span would be. She wanted me protected from as many nasty bugs as she possibly could. The injections hurt, and although I was OK initially, it did result in me screaming the house down for almost 12 hours

I refused all my feeds during this time, even with my new milk, but as soon as I had screamed myself hoarse, I cheered up and started guzzling away again!!!

With Daddy back at work, Mummy decided she was brave enough to attempt a solo trip back to Mid Wales again. She timed it perfectly. She loaded the car up, then fed me and as soon as I was settled, off we went. I didn’t wake up until we pulled into my Grandparents driveway, and Mummy was able to feed me again straight away. I loved being back in Wales. I got introduced to more friends, and even went on a tour of my Mummy’s home town with Grandma and Granddad (I think they were showing me off!!!). Granddad helped at night with one of the feeds to help Mummy sleep, and our trip back home went as brilliantly as our trip there had done. Mummy was very proud of me. The best bit at the end though was having a lovely cuddle from my Daddy.

As I was now on this new milk, Mummy was starting to ease off on the expressing. She still expressed what she could and added it to the Infatrini, but she expressed fewer times a day and gradually her production was starting to slow down.

My feeds remained 3 hourly, although on the new milk I was taking slightly less quantity (about 35mls a feed). Even though I was struggling a lot with my feeds, my weight gain continued, I still wasn’t 6 lbs yet, but I was slowly getting there. 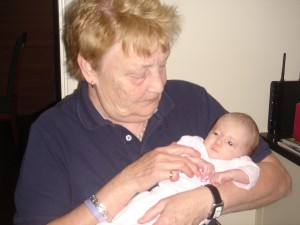 I had more visits in March too. My Great Aunt flew over from Belfast, and I met more of my Mummy and Daddy’s friends and family. I also managed a few trips to my Nanny and Pappy’s house which were great. My Nanny would feed me and was always so pleased to see me. I even met Bertie the dog (he barked a lot!!).

All in all, despite being a bit more grizzly, and struggling a bit with my feeding March was another good month. I had had my first swim, been to the shops, been to a ‘Music with Mummy’ class (Daddy even came too), and I was still gaining slight weight. I showed no signs of real illness, and my parents couldn’t believe my resilience. I was a tough little thing, and I wasn’t ready to give up just yet.