After my diagnosis, it was a little unclear what was going to happen to me for a day or so. Lots of visitors came to see me, including Pappy Watts, My Auntie Kelly and my Grandma and Granddad Hughes. It was great seeing so many friendly faces, although no-one was allowed to hold me in NICU apart from Mummy and Daddy. 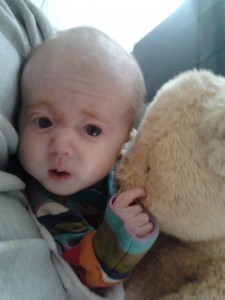 On the Monday morning, it was finally confirmed that an ambulance would move me to the cardiac ward of the Bristol Children’s Hospital. Mummy was very emotional. She had got used to the team and the set up at NICU and she worried about me moving to somewhere new. She had also been told that no-one was able to join me in the ambulance on the journey to the hospital. Mummy had not been apart from me and she didn’t like the thought of me being taken away without her. Thankfully though I was allowed to take Alexander the teddy bear with me for company. Look, here we are:

My incubator was taken into the ambulance, and with Mummy and Daddy looking on, I was taken out into the big wide world for the very first time. It was very bright. 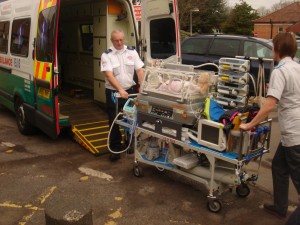 My parents drove to the hospital, and by the time they arrived on ward 32, I had been moved out of my incubator and into a special cot in my very own room. Unlike NICU, the room was really nice and quiet, and as I was now no longer in the incubator, my parents could pick me up and cuddle me whenever they liked. Mummy had also been discharged, and there was a drop down bed in my room, so she was able to stay with me for as long as I was there.

Lots of nurses visited my parents that day. Obviously, the fact I had Edwards Syndrome had come as a shock to everyone. They were asked lots of confusing things like did they want to be referred to the local children’s hospice? They couldn’t understand this. They thought the priority should be my heart operation and giving me every chance of being amongst the 1% long term survivors, rather than writing me off straight away. They were confused and so began a week of immense stress, strain and uncertainty. All of which looking back could have been avoided by letting us see the full picture of my syndrome.

Initially, we were happy at the hospital. The nursing staff were very friendly, and my parents were allowed to feed me, dress me, change me, bath me and cuddle me

. The visiting policy was also much more flexible than NICU, and as word spread about my condition, lots of family and friends popped in to meet me and support Mummy and Daddy. I was even feeding a little bit from the bottle, but still very small quantities. Mummy was still expressing, but could now do it in my room, which meant she got to spend even more time with me yaay!!! The hospital had to treat me for jaundice. It was horrible, I got placed under this funny lamp and had to wear an eye patch. I hated the eye patch, and kept pulling it off whenever I could.

The stress and strain was starting to get to my parents though. In between meetings with the nurses and the cardiologists, visits from friends and family, and looking after me, they had had no time to really digest what had happened and what they were being told. Within a couple of days of my arrival at the hospital, it started to become clear that the team had absolutely no intention of operating on me. It felt as though everyone was washing their hands of me, just because I had Edwards Syndrome, and would not give me a chance. My parents were frantic. They were beating themselves up, and were worried that they had missed a vital question they should ask which might save my life. 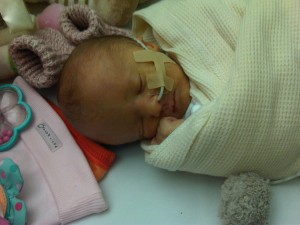 Instead of treating me, the medics were having discussions with my parents regarding non resuscitation policies, and it felt like they were being asked to sign my life away. They hadn’t even been parents for a week. They should have been home with me by now, enjoying their new family. Instead they were facing the most awful decisions of their lives. They were stressed, anxious, confused, exhausted and scared.

Things finally started to fall into place quite by accident. Despite refusing to operate on me, no-one had sat down with my parents and explained the practical implications of what having Edwards Syndrome actually meant. They were drowning in doom and gloom but with no-one really explaining why. Through a family contact, my parents finally spoke on the phone with another family who had a child with Edwards Syndrome who was now 6 years old. They relayed their own journey to my parents, and discussed their son. What my parents hadn’t realised was how weak I actually was, and that even if I did survive any period of time, it would not be as a healthy able bodied child. I would face serious mental and physical developmental issues. The family also kindly introduced my parents to a charity called SOFT UK, which had been set up to support families affected by Trisomy 18 and 13 (Edwards and Patau’s Syndrome).

On the Thursday morning, two ladies from SOFT UK visited my parents. It was only after this meeting that they finally understood the full picture.

The Doctors had obviously decided that I probably wouldn’t be strong enough to survive the operation, but that if I did, it was highly unlikely that I would ever leave hospital or come off a ventilator. The whole debate about quality of life started to raise its head at this point. The Doctors were very much of the opinion that there would be no quality of life for me.

That Friday evening, the lovely Reverand Tim Bell and his wife Mary came to the hospital and blessed me. A christening was arranged for the next day in the hospital prayer room and my parents spent the evening arranging the details and calling prospective God parents. They also decided that both of them would stay with me that night and that they would take it in turns to sleep on the drop down bed. 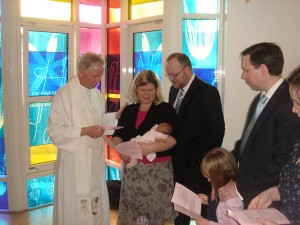 My Christening was a lovely ceremony. Here we all are:

It was emotional, but it was also a day of celebration.  Afterwards everyone went to a nearby pub to wet my head (although I never felt anything!!) With the ceremony over and my prognosis looking like no more than a few days, my parents were keen to get me home. A feeding tube was inserted to help me feed, and Mummy and Daddy had to be taught how to use it. Finally, on Tuesday 31st January, less than 2 weeks after my birth, all my cables were un-plugged and wire free, my parents put me in my car seat for the very first time. Both relieved and scared they finally took me home.