Mummy’s pregnancy was pretty straightforward. Mummy was very tired at first, but had no morning sickness at all. At 12 weeks pregnant, my parents decided to go for an OSCAR scan. This scan assesses your risk for Downs Syndrome, as well as the less common Edwards and Pataus Syndromes. Whilst it is not a conclusive test, it can help parents decide whether or not to have amniocentesis (a conclusive test but which carries a small risk of miscarriage). Many parents therefore rely on the OSCAR scan to guide them as to what to do next.

Mummy was quite worried, as she knew that due to her age she was already considered to be at a higher risk. Despite this though, the OSCAR scan put my Mummy at very low risk for all 3 syndromes.

My parents were once again over the moon as the test results re-assured them that the pregnancy seemed healthy and that based on that they would not need to go for the amniocentesis test.

Nothing much else happened, until at 28 weeks pregnant, my Mummy was told that she had developed gestational diabetes, and was at risk of having a very large baby. The doctors decided that she should be induced early (between 38-39 weeks), and she was sent for some additional scans to check on my size. 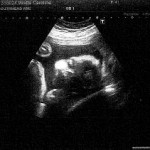 At 31 weeks pregnant, the first of these scans took place and everything went well. In fact Mummy says I was facing the camera and she had a perfect picture of my face. She says she cried, she was so happy.

A further scan was booked at 34 weeks. However despite being a few weeks away from giving birth to me, and having been told 3 weeks earlier that everything was OK, the midwives suddenly detected a heart defect. My parents were deeply shocked and upset. They had not been expecting this, especially as it was so late in the pregnancy. An appointment was scheduled with a Cardiologist, and it was confirmed that as well as having a hole in the heart, I had some other very serious heart abnormalities.

My parents were told I would probably need open heart surgery almost as soon as I was born, and that I would probably spend 2-3 weeks in intensive care at the Children’s Hospital in Bristol.

Needless to say Mummy and Daddy were devastated. However the medical team did tell them that although it was major surgery, I would probably make a full recovery and live a full and normal life afterwards. Whilst my parents were very worried, everyone seemed to be reassuring them that it would all be OK.

Mummy was due to be induced on Monday 16th January, but following a slight bleed she was admitted to hospital a couple of days early as a precautionary measure. It was then decided to induce Mummy a day early on the Sunday.