My arrival certainly wasn’t a speedy one that’s for sure! Mummy says that I didn’t want to come out!!

Mummy was a tiny bit scared because she knew I had a heart condition. She needn’t have worried though, as I had no plans of making an appearance just then anyway!!! 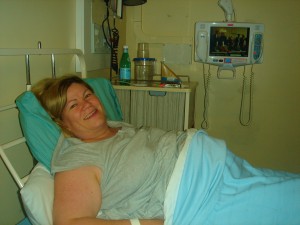 24 hours after being induced, nothing had happened, so Mummy was induced for a 2nd time. Tick tock went the clock….but I was still pretty comfy where I was thank you very much.

12 hours later, she was induced for a 3rd time, and when 12 hours after that it still hadn’t worked, a Foley Catheter was fitted. My parents waited and waited, but by Wednesday morning this hadn’t worked either.

Finally Mummy was moved to a delivery suite and her waters were broken. She was asked to walk around for 2 hours to try and start her contractions, but nothing seemed to happen. Eventually, she was put on a drip which normally kick starts everything. 13 hours later and still not having had one single contraction, Mummy’s options were limited down to a c-section. It was the small hours of Thursday morning when they moved Mummy to the operating theatre. She says it was very emotional as she knew she was going to meet me very soon, and she was also scared about my heart.

As for me, well I was having a lovely time in my Mummy’s tummy when suddenly things started to change. There were lots of bright lights around me and I could feel myself being tugged out of where I had been snuggling. I didn’t mind though as I got to meet my Daddy and that was well cool.

Daddy was very brave as they left him some of my cord to cut, which he did. Then he took me in his arms to meet my Mummy. She didn’t know that I was a girl and she had a bit of a cry when Daddy told her. 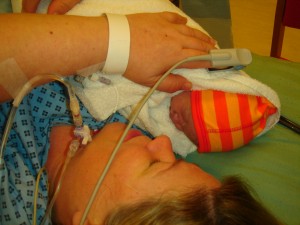 Here I am with my Mummy, having my first cuddle from her.

Not long after this cuddle, I was placed in an incubator and taken down to NICU. Daddy came with me too, so that I wasn’t on my own. The doctors checked me and I was attached to lots of very noisy bleepy machines.

Those were my first few hours.