The first thing my parents did when they got me home was to take me to see my room. They had been so upset that I might never see it and so were very emotional when they took me in it for the first time.

My Daddy was very lucky. He was able to take a few weeks off work whilst Mummy couldn’t drive. I loved being at home with Mummy and Daddy. I got to sleep in my moses basket for the very first time and it was lovely and comfy.

My parents decided that I should not be left alone in those first few weeks, so during the day I was taken into whatever room they were in. If they were in the living room, my moses basket and stand was in the living room with them too. At night time they took shifts to look after me. Daddy is a bit of a night owl anyway and so he and I would hang out in the small hours of the night whilst Mummy slept. Then when Daddy slept Mummy would take over. I loved my Daddy time, it was very special to me.

My parents found the feeding tube easy to use. I was feeding every 3 hours and taking about 40-45 mls in each feed. It only took a short time to feed me, and I didn’t seem to suffer from any wind. Mummy was still expressing and I think she found it very tiring, doing the feed cycles, expressing, sterilising, changing nappies, washing my clothes etc. I think sometimes she resented the chores, as it took precious time away from being with me.

As we were at home, we were referred to the Lifetime team of Doctors and Nurses. My lifetime nurse was called Helen, and she came to visit us as soon as we got home, along with our GP and the community Paediatrician. Everyone was lovely, but I know Mummy and Daddy found it hard as there were lots of conversations about how I might die, and to help them prepare for this.  They were given a suction machine should I choke whilst feeding, as well as morphine should I start to deteriorate and need calming. Spare feeding tubes were provided and syringes, and as I was wearing an apnoea monitor, spare tape and wires were given for this too.

In addition to these meetings, we also had home visits from our Health Visitor and initially as well from the Midwifery service. It was like Piccadilly Circus at times in our house!!!! The Midwives were coming to check that Mummy had recovered properly from her caesarean, and the Health Visitor came regularly to weigh me and help Mummy with advice and support. 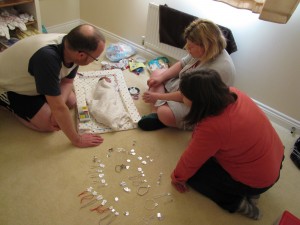 On the first proper weekend I was home, Mummy & Daddy arranged for a lady to come and take my hand and foot prints so that they could be put on jewellery for the family. I didn’t like it very much but she did manage to take some suitable prints. Mummy ordered  a heart shaped pendant and Daddy a key ring.

They also arranged pretty quickly for a photographer to come to the house to have a proper photo session with me. It was great fun, although I did get a bit grumpy at times. Look here we all are: 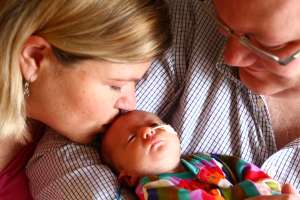 The other thing Mummy decided to do was to set up a Twitter account for me. She pretended she was me, and tweeted each day to my followers what I had done, and any achievements such as weight gain or feeding I had made. 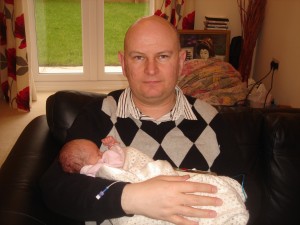 My Uncle David also came down for a visit. He lives in Liverpool and because he is Autistic, Mummy had been worried I may never meet him. However, a care worker came down with him for the day, and I got lots of nice cuddles. 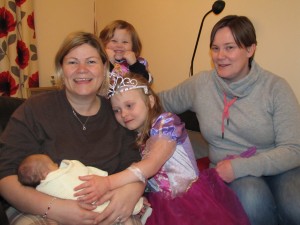 I had lots and lots of visitors, it was so lovely to meet so many people. Some brought food for Mummy and Daddy as they weren’t really looking after themselves very well.  Helen and Eric came to see me from Holland, my Godmummy Ella flew down from Scotland, as did my Mummy’s friend Emma. My GodDaddy Jon came round loads, as did Lydia and Ian and of course my Nanny and Pappy Watts as well as my Auntie Kelly and Uncle Damian and my cousins Daisy and Matilda. I met some of my Mummy’s family too, uncles, aunts and cousins as well as her own Godmummy Jan and her husband Ben. I also met some of Daddy’s colleagues. They were all really nice, they brought me lots of nice presents and always gave me a cuddle 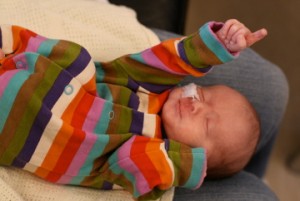 Mummy and Daddy soon started to notice my pointy finger, which I liked to flick across my face! I was always trying to pull out my feeding tube, I would craftily get my finger under the tube and give it a good flick to see if I could get it out. I succeeded several times

The first time I did it, Mummy just let me take my milk from a syringe until the Lifetime nurse arrived and was able to put the tube back in. As I was taking a little bit of milk orally, Mummy continued to do that at every feed. I would have a little taster first from the syringe, and then when I got too tired the remainder would be fed down my tube. The second time I pulled it out we were actually on our way to the local Children’s Hospice for a meet and greet/tour. So the staff there helped to put it back in. Then after pulling it out a few more times, Daddy took the very brave step of agreeing to learn how to put the tube in himself.  He was amazing, and was very gentle. Mummy and I were so proud of him.

Mummy and Daddy were a bit nervous about being at the Hospice at first. They initially visited the Hospice reluctantly. I think they were just struggling to come to terms with my diagnosis and the fact that their only child needed hospice care. The tour included a visit to a room called ‘Starborn’ which is where any child who dies at the Hospice is laid to rest. I think seeing that really upset my parents. They weren’t ready to face up to losing me just yet.

That said, albeit reluctantly, my parents did book a date for our first stay there the following week. Our first night at the Hospice was February 14th. I don’t think it was quite how Mummy and Daddy had envisaged they would be spending Valentines Night. To be honest we arrived really late that night. My parents just didn’t want to go.  When they arrived, and they had had a bite to eat and completed the booking in procedures, we all just went off to bed and pretty much hid there. In fact it was 1pm the next day when a member of staff came knocking on the door to check to see if everything was OK!!

That afternoon I had to go for a follow up appointment at the Children’s Hospital with the Consultant Cardiologist. No scan was done on my heart, and the message given to my parents was very much just get on and enjoy life with me while you can. He also encouraged my parents to take me to Mid Wales to see Grandma and Granddad Hughes.  On return to the Hospice, Mummy and Daddy had a meeting with the Paediatrician. The meeting was very intense. It focused a lot on ‘the end’, signs to look out for, and what might happen. At the end, Mummy was completely drained and finally she conceded that she did need respite care from the Hospice after all. 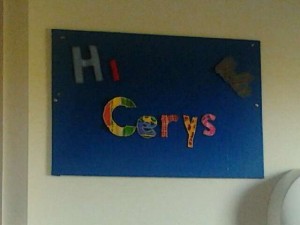 That Night I was moved down into a beautiful room…it even had a welcome board for me, so that my parents could get some rest and try to re-charge their batteries. They actually went out for dinner, and when they came back were elated to hear from my nurse that I had managed to take an entire feed from the bottle.

We then returned back home, and I continued to feed sporadically from the bottle. My parents also decided to take the consultant cardiologist up on his word, and took me to visit my Grandparents in Mid Wales. It was great, I got to visit the house where my Mummy grew up and meet lots of lovely people. I was very well behaved too. Mummy and Daddy were starting to wonder if perhaps I might be around for a bit longer than initially suggested. 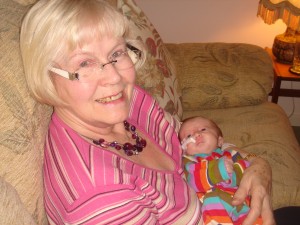 When we returned from Wales I had to attend a hearing screening test. They put lots of funny things on my ears which made bleepy noises. At the end, it was confirmed that my left ear was fine, but that my right wasn’t. Mummy and Daddy were really pleased that one of my ears was ok, as Mummy loved playing music to me. It was agreed I needed a much more thorough test to be done that Friday. 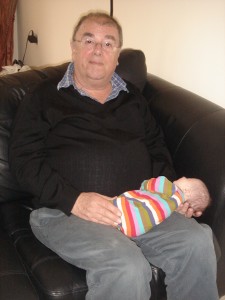 A second trip to the Hospice was also lined up. Mummy and Daddy relaxed a lot more this time, and let the staff help as much as they could. Mummy found it helpful chatting to the staff. Although none of them could change anything, they seemed able to just listen and understand. The staff were also dedicated to helping with my feeding. Mummy had had some success with the bottle with me, but had still had to rely on the tube to finish off most feeds. The staff had much more success and were able to get me to take my full feeds every time from the bottle. So, Mummy and Daddy sat with them to see what and how they were doing things. Gradually, I started to take all my feeds from the bottle, and my parents were so pleased. It felt much more natural feeding me this way and meant that I could taste my food.

A bit disappointingly, the hospital rang whilst we were there about my hearing test. They had found out I had Edwards Syndrome and were wondering if it was worth me coming in. Mummy was very upset by this attitude. Of course she wanted to know how well I could or couldn’t hear. It felt as if no-one wanted to bother with me. The Hospice called the Hospital back on Mummy’s behalf and explained how hurtful the call had been, and it was agreed that the test would still take place on the Friday.

The test involved a lot more funny looking things being placed on my head, and bleepy noises. It came up with the same result though, my left ear was fine, my right ear seemed a bit weak. This seemed quite normal apparently, so no immediate course of action was recommended.

Mummy and Daddy were so pleased that I managed to attend the NCT post baby reunion in February. They had made some lovely friends at their NCT meetings, and they really hoped I would be able to meet everyone. We all met up, and I was introduced to all the other new babies in the group.

By the end of February, things were very much looking on the up.  Not only had I been home a month, been continually gaining weight (albeit very slight), been on a trip to Mid Wales, been out to my Nanny and Pappy’s house and was still very much here: having fed so well from the bottle, my naso-gastric tube was actually removed. Hip Hip Hooray